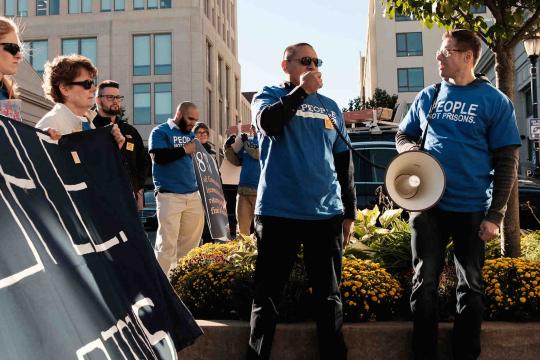 In 2017, the ACLU’s Campaign for Smart Justice embarked on an unprecedented, multi-year campaign to reduce racial disparities and halve the U.S. jail and prison population.

The cornerstone of this effort was a series of state-specific reports giving criminal justice reform advocates in every community a diagnosis of what causes mass incarceration in their state, along with a menu of possible steps to reduce imprisonment and the racial inequity that accompanies it.

This bold undertaking relied on enormous amounts of data, and the ACLU recruited Spitfire to ensure the 51 data-filled reports were memorable and motivational. In response, Spitfire created a framework for tying detailed data from the Urban Institute into compelling narratives about the human toll of mass incarceration in each state.

Telling the stories of what’s happening on the ground is essential to helping advocates and others understand what’s behind the data and what’s driving mass incarceration. While racism is a factor across the board, each state has unique systemic problems that must be addressed. So these reports — and the language used to talk about criminal justice and racial bias — do more than communicate the facts. They make a persuasive case for why each state must make fundamental changes to their criminal justice system, from revising their criminal code to addressing prosecutorial abuse to reforming the parole system.

Building a compelling narrative is also crucial to fostering empathy, not only for non-violent offenders but also for incarcerated people who have committed acts of violence. That’s because every type of crime must be addressed to generate systemic change. Reducing mass incarceration by 50 percent can’t be accomplished by just chipping away at the edges. It requires advocates — and others who received these reports, including elected officials, the media and the public — to look deeply at the problem and find new strategies beyond simply locking people up for the rest of their lives.

But creating and telling these stories was only part of the assignment. Spitfire helped the ACLU and its partners create a process for ushering these reports through a labyrinth of reviews and approvals. In each state, reviews involved dozens of stakeholders, including the ACLU’s national team, state ACLU affiliates, local advocates and partners. Credibility was vital to the success of these reports, so accuracy was essential.

Understanding a problem is the first step in solving it. With these reports, the ACLU gave advocates the data they needed to analyze the issues in their state and implement concrete solutions to reduce mass incarceration. By presenting the information in compelling ways, Spitfire helped the ACLU make the kind of impact necessary to achieve its ambitious objectives to reform America’s criminal justice system.