Get Out the Count: Census Counts 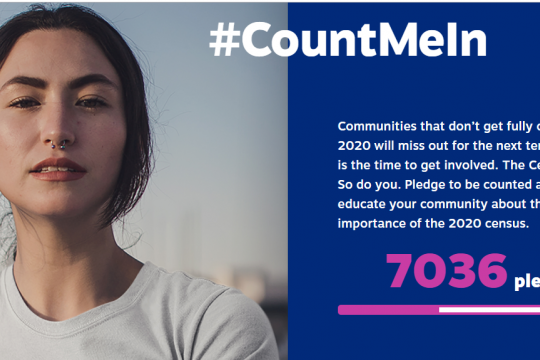 In 2019, Spitfire worked with The Leadership Conference Education Fund as its communication firm of record for the Census Counts campaign that includes organizations across the country. To kick off a year and a half effort to get a fair and accurate count, we developed affirmative messaging encouraging broad engagement from many audiences to participate in the 2020 census. We created a toolkit of materials for partners of The Leadership Conference, including civil rights and state groups, businesses and nonprofits representing children. The toolkit included template op-eds, sample talking points, social media guidance and sample content. We also created a hashtag #CountMeIn to measure the impact of the campaign on social media. For the April 1 campaign kickoff, one year away from Census Day, we hosted a media briefing on the day of action that was attended by reporters from ethnic media, national and local outlets, including The New York Times, NPR, USA Today, Associated Press, Ethnic Media Service and many others. The day of action had incredible social impact, reaching more than 80 million individuals across the U.S., and The Leadership Conference website was the top trending URL on Twitter during that time. Spitfire helped The Leadership Conference and partners drive extensive coverage across the country, including in outlets like NPR, Sampan and India West.

Spitfire shifted its focus to providing The Leadership Conference with media relations support around the April 23 Supreme Court oral arguments, debating the Trump administration’s attempt to add a citizenship question to the 2020 census form. Our work included crafting a detailed media strategy designed to highlight how the citizenship question would harm a fair and accurate count, particularly from politically-moderate voices. We coordinated media availability and messaging, and drafted, pitched and placed op-eds representing key members of the business community including Nielsen, Levis, TechNYC and Insights Association. Op-ed signers included business voices like that of Minneapolis Regional Chamber President Jonathan Weinhagen. We also connected national and state media with spokespeople from The Leadership Conference and its partners, including making connections with Reuters, MSNBC, The Hill, Vice and NPR. We also monitored nation-wide media to highlight opposition messages on the citizenship question and lift coverage of The Leadership Conference and its partners across the country, both in the run-up to the oral arguments and as a summary of the day of action.

We then geared up for the decision on the citizenship question. Spitfire worked with The Leadership Conference and Census Counts to prepare for all possible scenarios regarding the Supreme Court’s decision. We conducted a training for Census Counts members on inoculation messaging, introducing what inoculation messaging is, how to craft it and how to use it to combat disinformation around the census. During the training, we worked with members to develop their own inoculation messages. Spitfire turned these messages into graphics for the Census Counts partner toolkit. We created social shareable graphics and guidelines to support members in rapid response efforts for The Leadership Conference’s digital toolkit. Spitfire worked with The Leadership Conference and Census Counts to present the importance of a fair and accurate census count for businesses and local governments. We pitched and executed a media briefing with Republican Mayor John Giles of Mesa, Arizona and Dr. Andrew Reamer, research professor at George Washington University as speakers. Our press release earned wide media attention.