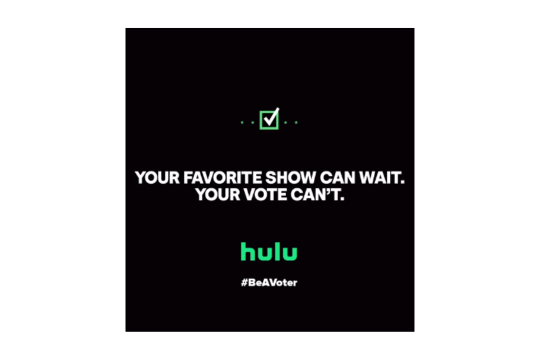 When it comes to making the world a better place, Spitfire understands that socially conscious businesses have a powerful role to play. Spitfire partnered with Hulu’s culture team in the lead up to the 2020 U.S. presidential election to leverage the brand’s platform to encourage its 35 million subscribers to register and turn out to vote in what became a historic election.

A beloved brand, Hulu has a built-in audience of loyal subscribers, highly engaged social followers and award-winning streaming content. Hulu’s culture team had laid the groundwork for connecting with audiences based on their values and identities through the Find Your Voice platform, and the next step was to leverage this connection to move people to act.

With deep expertise in crafting compelling messages that move people to action, Spitfire built a comprehensive message framework that corresponded with electoral milestones and moved Hulu’s audiences up a ladder of engagement—from registering, to making a plan to vote, to casting their ballots—while staying true to Hulu’s nonpartisan brand values.

With only two months before the election, Spitfire worked on an expedited timeline to develop a strategy for delivering our messaging to audiences in time to drive voter participation. We also conducted comprehensive scenario planning to ensure Hulu would be prepared for any election outcome.

Equipped with a comprehensive message framework and an overarching strategy, Spitfire shifted gears to focus on content that brought Hulu’s messaging to life, ranging from memes and social posts to educational video content—and even a Madison Square Garden billboard—leveraging Hulu assets and key cultural moments during the election season.

Throughout the election season, Spitfire helped Hulu leverage its platform and creative properties to get crucial information about voting and the election in front of more than 35 million people. The 2020 election made history. More votes were cast than in any previous U.S. election, and the turnout rate was the highest in more than a century, particularly among some of Hulu’s key audiences—young voters and voters of color.