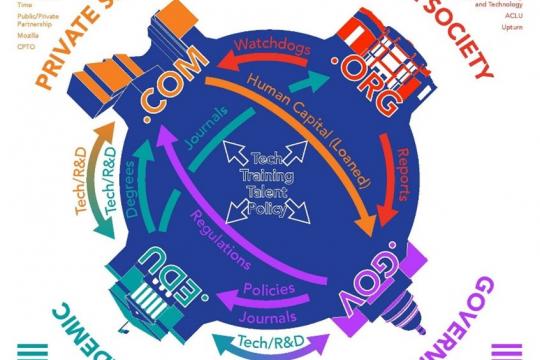 Over the past decade, The Ford Foundation has been instrumental in identifying the need for the field of public interest technology (PIT) and investing in efforts to nourish this nascent field. The Foundation recognizes that few historical periods can claim the scale of revolutionary change that has produced the digital innovations of the 21st century. Technology has unlocked human potential and empowered societies in ways that seemed impossible mere decades ago. But technology is often built without consideration for the harm it could bring and the ways that insights culled from our data could be used against us. Drawing on its experience to develop and fortify the field of public interest law in the 1960s and 1970s, Ford committed $50 million to accelerate the development of the field of public interest technology to protect individual rights, justice, social welfare, and the public good, particularly considering people who are and have historically been harmed by power structures. Ford partnered with Spitfire to support the promotion of the field and encourage those involved to identify themselves as part of the field.

For society to fully benefit from the power of technology while offsetting its harms, academia, the private sector, government and nonprofits will need to infuse PIT throughout all four sectors.  Spitfire works closely with Ford’s president and international director of Technology and Society to make the case for PIT across the four sectors. One of the most promising investments is the Public Interest Technology University Network (PIT UN), a partnership that unites 36 colleges and universities committed to building the nascent field and growing a new generation of civic-minded technologists. Spitfire worked with the network’s communication and development teams to build the communications infrastructure among network members with a particular focus on engaging donors and the media. Spitfire created a messaging guide so all the campuses could tell the story of PIT in a consistent way as they train the next generation of public interest technologists. We created and hosted a community of practice among communications and development teams at participant universities, giving them the chance to learn from one another and identify best practices for promoting the field. And we lifted up practitioners in action and injected PIT consideration into critical discussions from elections in the New York Times to contact tracing in Fast Company, among others. Spitfire also designed a session between university presidents and Darren Walker, Eric Schmidt and Anne-Marie Slaughter at the PIT UN annual convening to facilitate cross-sector knowledge sharing.

While Ford has funded PIT projects with civil society organizations for years, the private sector remained an elusive challenge. How do you convince companies that they need to be more proactive in protecting consumers from the unintended harms produced by their technologies? We started to crack this nut by interviewing executives from private sector companies to gain a better understanding about their knowledge of public interest technology and their barriers to integrating the concept into their company structure. Spitfire drafted a case statement for and graphic representation of the field for Ford to share with the companies and collect their insights. This process highlighted various opportunities for both Ford and the company executives about how to incorporate PIT into their business models.

Ford also knows that it cannot accelerate the development of the PIT field alone. Spitfire is supporting Ford in recruiting additional funders to invest in the field. In early 2021, Spitfire facilitated a meeting with Ford and a dozen more foundations to discuss their current funding priorities, where they have similar interests and what gaps they need to fill to support the PIT field infrastructure.