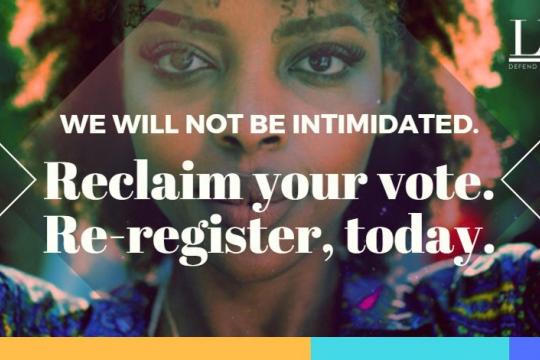 At a time when civil rights are in the crosshairs, Spitfire’s work has helped make the difference on issues such as voter intimidation, the criminalization of Black girls and the importance of affirmative action in higher education.

When President Trump started spreading mistruths about widespread voter fraud — often laced with racially-coded language to connect voter fraud to urban and immigrant communities — and launched the Presidential Advisory Commission on Election Integrity in May 2017, Spitfire led LDF’s Reclaim Your Vote public education campaign to inform voters of their voting rights and discourage them from deregistering. Informed by the stories coming from communities of color who had experienced voter intimidation, we drew on the history and strength of the Black community to develop the campaign’s prevailing theme: Everyone has the right to vote and this is no time to be afraid. Our messaging and stories were shared on LDF’s Reclaim Your Vote website and disseminated widely across social media and strategic earned press coverage. LDF’s message carried far and wide, contributing to the mounting public pressure that helped put an end to the Commission, a move announced in January 2018.

With Black girls the fastest growing demographic affected by school discipline and arrests, LDF developed a case study on Baltimore to show how the pathway to the juvenile justice system too frequently begins in schools. Building on LDF’s report, “Our Girls, Our Future,” a title Spitfire developed, as well as a corresponding campaign, Spitfire organized a town hall forum. The study and forum brought local and national stakeholders to the table and garnered earned strategic press in Baltimore and in outlets across the country, highlighting the consequences for individuals and communities when Black girls are subject to disproportionately harsh punishments and even pushed out of school. The attention paid to the study moved the Baltimore schools chief to admit, “The report is waving a flag and saying to us: Don’t forget that the particular experiences of Black girls are worthy of attention and support. They have particular needs.”

When Students for Fair Admissions, an organization purporting to represent Asian American college applicants that’s instead a front for anti-affirmative action crusader Edward Blum, sued Harvard to attempt to prevent the elite university from considering race as part of its admissions process, Spitfire designed a strategy illustrating how diversity improves the educational experience of all students. Over the course of the year-long trial, we helped elevate the voices of students, alumni and civil rights attorneys everywhere from Teen Vogue and Refinery29 to The New York Times, the Washington Post and Insider HigherEd. When the ruling came down in October 2019, the judge named the importance of student voices in her ruling in favor of maintaining affirmative action.