Center on Privacy & Technology at Georgetown Law, the Brennan Center for Justice at New York University School of Law, and the Center for Media Justice 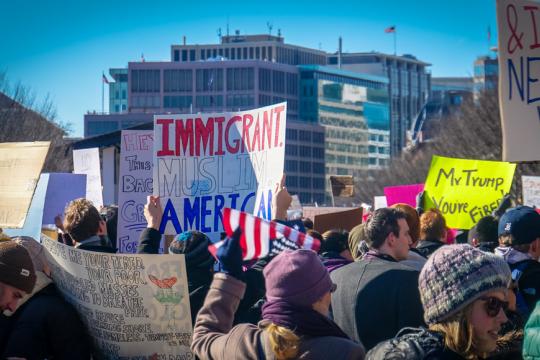 In recent years, Muslims — particularly in the United States — have faced a backlash even more vigorous than the antagonism unjustly hurled at them after the 9/11 attacks. Spitfire has always stood on the side of immigrants, and in 2017 we helped a coalition defend immigrants against digital threats to their rights, which were already under duress.

When Donald Trump issued an executive order banning refugees from mostly Muslim-majority countries, immigrants and refugees were worried. Fuad Shareef and his family, for example, prepared to complete their move from Iraq to Nashville, where they had been cleared to resettle. But when they arrived in Cairo to fly to America, they were told by the U.S. Embassy in Baghdad that they could not board the flight, despite having left their lives behind to move.

Since then, the “extreme vetting” has intensified. Immigrants and refugees from Muslim countries seeking to establish roots in America have been systematically denied the opportunity to come to the U.S. to pursue the American Dream.

And in the summer of 2017, the administration’s extreme vetting policies almost got even worse. Spitfire helped to make sure that didn’t happen.

The U.S. Department of Homeland Security published a “statement of objectives ” for a system that would use computer algorithms to scan social media and other online materials to automatically flag immigrants and visa applicants they deemed undesirable — and continuously watch the activities of those allowed into the U.S. The office of U.S. Immigration and Customs Enforcement (ICE) said it was seeking a contractor to do this surveillance work.

Immigrants weren’t the only ones who were alarmed. Three organizations — the Center on Privacy & Technology at Georgetown Law, the Brennan Center for Justice at New York University School of Law and the Center for Media Justice — took action to convince DHS to abandon the initiative. They brought together a coalition of more than 50 computer and data scientists, mathematicians and other experts in automated decision-making to publicly assert that the idea of breaching individuals’ social media content to determine whether they should be allowed into the U.S. or deported was xenophobic, racist and illegal.

The coalition turned to Spitfire to draw attention to the issue. After taking a close look at the audiences that could be tapped on the issue, the coalition knew exactly where to take aim – the businesses that might bid for the surveillance work. Together with the coalition we developed a communication strategy centered around earned media and social media, the very venue where the DHS policy would play out.

First, Spitfire reframed the concept of this new form of extreme vetting to call it what it is: a #DigitalMuslimBan. This built on previous successful efforts to make clear that every iteration of the Trump administration’s travel ban was discriminatory.

Spitfire then partnered with the coalition on every aspect of their campaign, including the development of messaging to make highly technical information more accessible and educate audiences on the pitfalls of the technology: It wouldn’t work and it would discriminate. The coalition submitted a joint letter to DHS signed by dissenting researchers from major technology firms and academia calling the #DigitalMuslimBan “neither appropriate nor feasible.” In addition, the coalition put together a second letter from civil society groups, who also privately lobbied potential vendors, such as IBM, not to engage in the initiative.

To publicize these actions, Spitfire helped lead a press conference and widespread media outreach plan that resulted in both national and regional coverage in outlets such as Reuters, The Intercept, Gizmodo and The Hill. This outreach leveraged Spitfire’s deep connections in the mainstream media as well as targeted outlets that cover technology and public policy.

The coalition also took to the internet with a #DigitalMuslimBan social media campaign, which included the engagement of key online influencers such as Sarah Kendzior, Brian Root and Access Now. On November 16 and 17, 2017, Spitfire monitored the social media landscape and recorded 5,367 social mentions using relevant terms — including #digitalmuslimban, DHS extreme vetting initiative and IBM petition — during those two days.

The campaign was successful.

The intense negative response to the plan pressured corporations and businesses into not applying for the work. IBM publicly stated in fall 2017 that the company “would not work on any project that runs counter to our company’s values, including our long-standing opposition to discrimination against anyone on the basis of race, gender, sexual orientation or religion.”

More important, the mix of public pressure and business revulsion forced the Trump administration to backpedal. ICE realized no such technology exists—and that it would be extremely expensive to develop it—and announced it would instead seek contractors to manually review the online profiles of immigrants and visa applicants. And in May 2018, the administration formally announced it was no longer seeking machine technology as part of its extreme vetting program.

The battle against the #DigitalMuslimBan and similar initiatives is far from won. The manual process ICE has proposed has its own dangers, and the anti-immigrant and anti-refugee sentiment seems likely to continue. And at every turn, Spitfire will keep fighting to protect the rights of immigrants and their families.